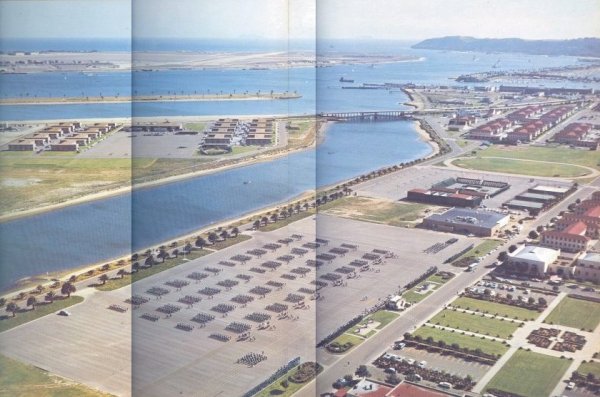 This is the Recruit Training Command at Naval Training Center in San Diego, CA.  On the left above the canal is Camp Nimitz where recruits spend their first four weeks before crossing the bridge to the buildings in the upper right.  In the background is Point Loma which I mention in chapter five.

The flight arrived at San Diego about midnight. On the way out Phillip had charmed the hostess into serving us drinks. I am sure she knew we weren’t 21, but Phillip had told her we were joining the service and I suppose she figured it didn’t hurt. We were strutting pretty tall when we got off the plane. That would quickly change.

We checked in at the military check in and were told to have a seat where about 20 others who had arrived ahead of us had already had seats. Phillip and I found places to sit on the floor. Within seconds a dark gray school bus pulls up and we are instructed to get in. Those would be the last polite words we would hear from anyone of authority for the next 10 weeks.

Naval Training Center (NTC) was only a few miles away and the trip was a short one. The bus pulls up to a paved lot and opens the door. A sailor in whites with a blue armlet climbs on board and says “Listen up! Outside there are some squares with numbers in them. Are you maggots capable of reading numbers? If so, get off this bus and find yourself a number. If not, get off anyway. NOW!”

I looked at Phillip. He looked at me. “Did he call us maggots?”

Little did we know this was only the beginning of hell. We were checked in and got to bed about 1:30 AM and at 4:00 AM Mr Armlet is waking us up with the word “maggots” again and we begin a long day of processing that included haircuts and getting new clothes and I don’t remember what else. It all turned kind of foggy from that point on.

The following morning Mr Armlet did not show up. We hear a much deeper and even louder voice, but his timing is still the same . . . 4:00 AM. “I better see every last one of your butts on that grinder in ten minutes.” He turned and walked out. Something told everyone in the barracks this was the real deal and we better be on that grinder in ten minutes. I think Phillip and I were there in three. We weren’t taking any chances.

We were at attention, or as close as a bunch of bumpkins on their second day of military life can be when Mr Brown uniform with a gold anchor on his hat approached us and said. “Maggots” (I was really beginning to hate that word) “My name is RDC King. I am your Company Commander. We are going to spend the next ten weeks together. During those ten weeks I intend to take every one of you apart piece by piece and put you back together the way the Navy wants you. You will still be maggots, but you will be my maggots and I build the best maggots in the US Navy. You are going to hate me. You are going to want to strike me. I challenge one of you to do that and set an example for the rest of the maggots when they see what that leads to.”

He stops and takes a breath and then he mellows his voice a bit as if there might actually be a kind bone somewhere in his body. “Do any of you boys (he didn’t use the m word) have leadership skills?” Everyone was afraid to say anything. “Surely some of you are leaders. Were any of you leaders in your schools?”

A couple of hands went up. Phillip half way raised his hand. He was only being honest, but I think he could smell a rat. RDC King walked up to Phillip and said, “Well, did you or didn’t you?” Phillip shook his head. “I can’t hear your head rattle.”

“What did you lead.” King said in a very sarcastic way.

“I was class president, sir.”

“Then get up here,” King shouted.

With that exchange Phillip Long had become a squad leader and took his place at the front of the line.

What had just transpired had me grinning. I couldn’t help it. King picked up on my grin and suddenly RDC King is in my face. “What is your name?”

“Are you a leader, Webster?”

“I didn’t think so, Webster. You are a screw up, aren’t you, Webster?”

RDC King walked back to Phillip. “Long. Webster is in your squad. He is a screw up. Leader’s don’t have screw up’s on their squads. Give me 50 push ups, Long. NOW!”

Phillip hits the deck and everybody in the whole company is struggling to keep a straight face except Phillip who is questioning his leadership skills about now and wondering why he raised his hand.

The first week of basic training was filled with fundamental things that are designed to take you apart and make every man equal. Funny how all personality goes away when you are bald. Guys who had hair to their shoulders when they entered the gates of NTC now looked the same as those who came in with crew cuts. Everyone wears the same clothing and individual identity disappears. The first two weeks are hardest. It is more emotional than physical. It doesn’t matter who you were when you came in or where you came from . . . you are now a nobody. You are a maggot and will remain so until graduation.

Phillip proved to be a very good squad leader. There are lots of stories I could tell about little things that happened along the way, but nothing remarkable except for one thing that really pissed Phillip off. We had been in training for about two weeks when one day a bicycle approached and the rider handed a message to RDC King. He read the message and looked out at the company.

“Does anyone in the company know how to type?” King asks. There was something about the way this had come about that made me think I should raise my hand. I also knew raising your hand for anything could be risky. Nobody else responded. King walked up to me and instead of yelling he asked me in a normal voice where I learned to type.

“I took typing in school, sir.” I replied.

I made my way to the battalion office about 200 yards away and knocked on the door. I was told to enter. The battalion commander put me through a brief skills test and asked me some questions about myself and just like that I had found myself perhaps the cushiest job a recruit could have for the next eight weeks. I was the personal assistant of the battalion commander who arranged for me to be exempt from barracks fire watches at night because he wanted me alert during the day. I was given a bicycle to ride across the river to deliver his reports. Never did I stand a daily inspection again, only the major inspections, and ironically as I prepared reports every day I could look out the window and see all the fun I was missing as my company practiced on the grinder.

At night I would return to Company 505 for a place to sleep, do laundry and enjoy what social life we had. In the beginning there was a lot of resentment toward me for getting out of all the hard physical work, but it later started to wain, especially when I started testing the limits of what I could get away with on the other side of the river at base command. I would bring back cigarettes and candy bars and other things that were contraband and highly valued. I made sure I always took care of my “buddy”. After about two weeks I was no longer a “sack of shit” and back to being Webster again.

Phillip still didn’t like the fact we went in together and we were going to stick together until the end. “I couldn’t help it” I always told him.

Everything would have been fine if it ended there, but two more times I left Phillip on his own and both times ended in disasters.

I am an American. I was Born Under a Wanderin' Star. Since 2010 I have called the Philippines home.
View all posts by Marvin David Webster →
This entry was posted in Phillip Long and tagged San Diego Naval Training Center, US Navy Basic Training. Bookmark the permalink.